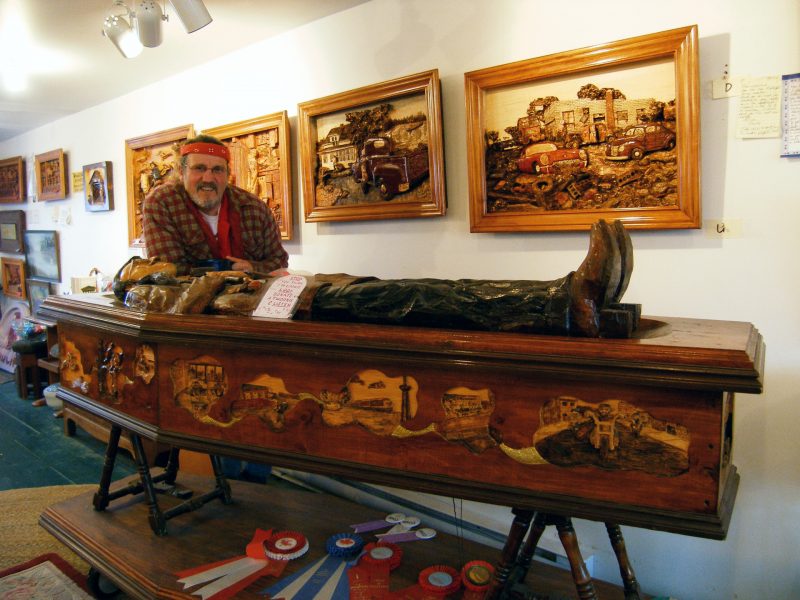 A Tour of a Lifetime

Silhouetted against windows overlooking La Dune de Bouctouche, “The Woodchuck” hunches over his workbench. Close at hand are his tools – chisels and mallets made by his brother – and over his shoulder, a charcoal likeness of Jesus. Above the bench, one of his first relief carvings. Reminders of grace and how far he has come. 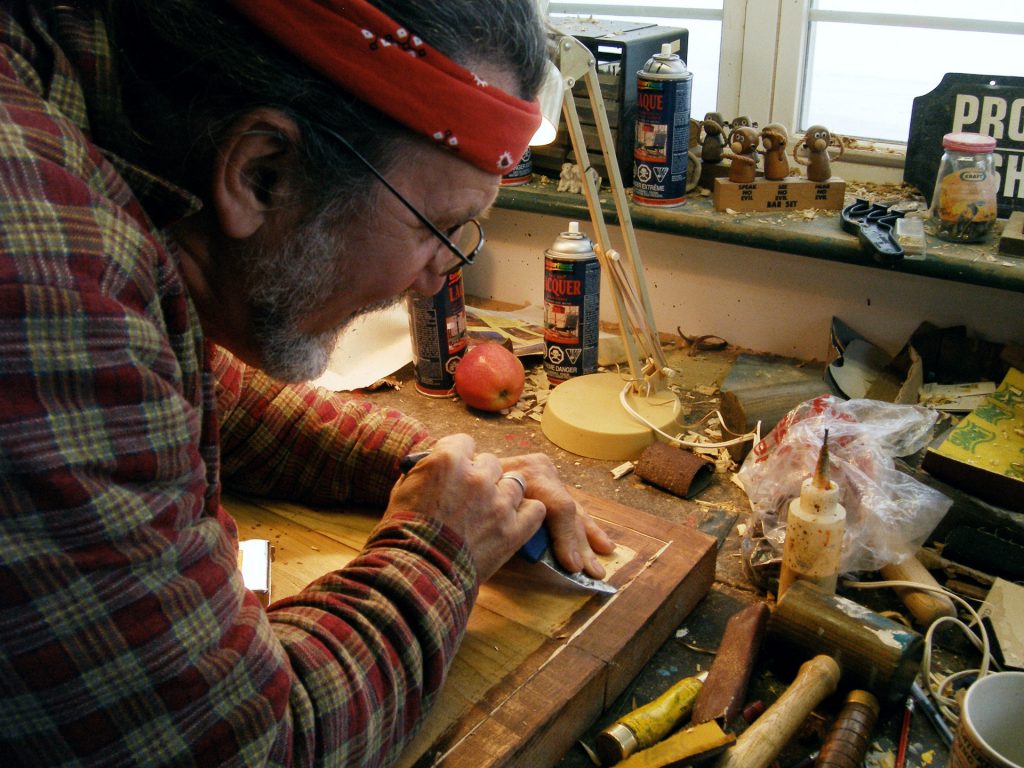 The studio is a cacophony of clutter. At first glance, a hutch seems piled with books, chocolate bars, matchbooks, a half-eaten hot dog, billiards, Tim Horton’s coffee cups, chisels and paints. But at second glance, they are mementoes carved in wood. A hutch in the clutch of life.

People arrive here by chance, through word of mouth, or in the tow of relatives and friends. Most leave laughing, some shaking their heads, still others with a slightly different perspective on life. Few are adequately forewarned.

“You don’t just meet The Woodchuck, you experience him,” offers his wife, Cheryl…alias Woodchip. Her antique and collectible shop – Woodchip’s What-Knots – lies adjacent to Woodchuck’s studio.

“People come into my shop to browse, then go see The Woodchuck,” says Cheryl. “Some will be there an hour or so and I can’t wait till they come down to see their expressions. Sometimes I sneak up and sit on the stairs, or outside on the swing, to listen to the reactions.”

Many come for the coffin, which resides above his workshop, a centrepiece in the gallery of his deftly detailed wall carvings. On its lid lays a carved Woodchuck in Sunday mass garb (complete with chisel, mallet, cowboy boots and a great, big satisfied grin) and around the sides, 19 panels depicting scenes from his life. “I just hope they let Cheryl use it in the church when I die,” he jokes.

For less than the price of a double-double and a donut, Woodchuck will take visitors on a road trip around the coffin, scene by scene; an irreverent performance of his life with music and grand drama.

He tells visitors, “If you think I’m loony, donate a toonie.”

“All this for two bucks!” Woodchuck marvels. “Where can you get this happy for two bucks? I’m a national treasure!”

Growing up in Dieppe during the ’50s, Chuck wanted to be a priest until a substitute teacher disciplined him harshly.

“She told me the devil had me with a golden ring to the nose and was taking me to hell. I remember hearing my brain change right then and there.”

When he was 16, another teacher told him he could wear a thousand dollar suit and still look like a hoodlum.

“After awhile if people tell you you’re a hoodlum and the devil…well, pretty soon, you think you should become one.” He moved to Toronto and joined a biker gang, then did time in penitentiary where he learned to be a safecracker. More time inside ensued. He occupied the prison hours drawing designs on wooden plaques.

He came home to Dieppe the year Elvis died and with money earned as a truck driver opened a Variety Store on Champlain Street. He existed hand to mouth for years until he met Cheryl in 1988, and sold the store.

“On our first date, he told me, ‘Life is an incomprehensible joke’,” says Cheryl, the sweet-spoken yin to her husband’s yang. “I went home and said to my roommate, ‘He’s a neat guy and I’ll hang out with him, but I’m not going to marry him. He’s right out of it.”

A year later, he proposed, saying, “You may be poor, but you’ll never be bored.” Cheryl recognized his talent and suggested he start carving for a living while she pursued her passion for antiques.

Chuck is unconcerned about sharing his past. “I am who I am,” he shrugs. “And yet, the world is a stage, isn’t it? I played the part of a biker, a safecracker, an actor, a son. All these parts make our truth.”

The love of wood and performance came from his father. Louis Bernard wrote plays in his head and, using his children as performers, presented them in church halls for a dime. He created props for his productions from wood, and Chuck helped him build cabinets for extra money.

“I think without knowing it, he impassioned me with this,” he says.

Sometimes, he sits by the coffin for hours, lights off, contemplating life. Or loses himself in Chris de Burgh or Kingston Trio ballads. Each one of his carvings is a narrative. Some carvers search for the story in the medium, bringing grain and colour forward with polish; Chuck imposes his own style and story on the wood, chiselling and shaping, using the rawness of white pine to show real life and emotion, with its rich detail, truths, and yes, blunt edges. You can put your fingers right in them. They are unique and universal at the same time. 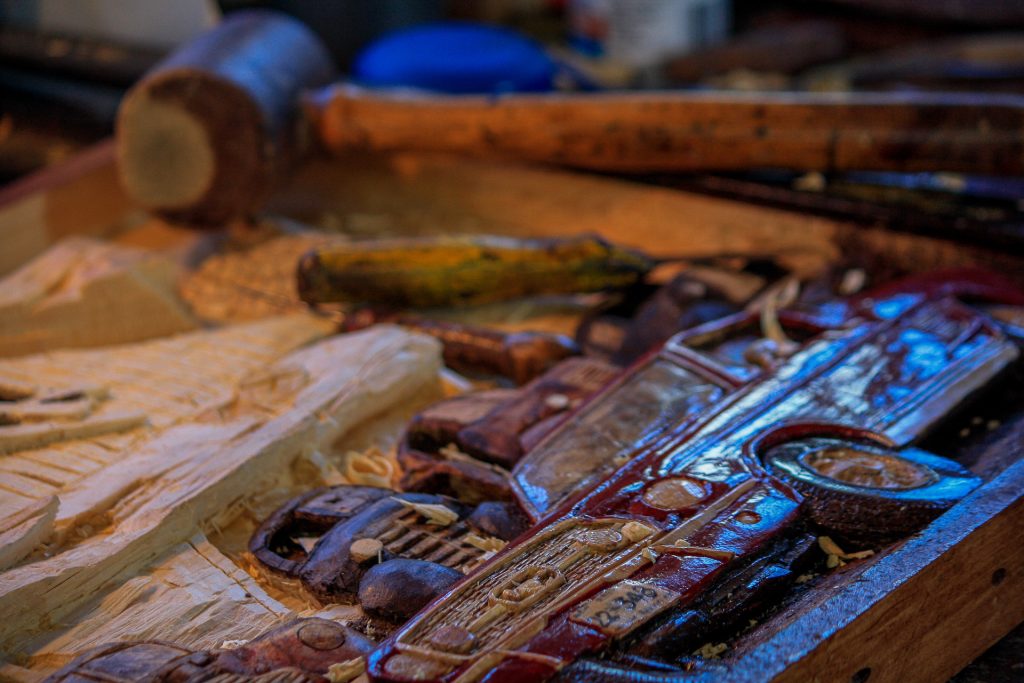 “I love giving a piece of wood life,” says Chuck. “I have a sense of wonder with everything I carve. I’m never sure how it will quite turn out. I take a piece of wood, chip away on it for while and it becomes a living thing. I think it’s like having a baby. Can you imagine giving life to a baby? My mother had twelve.  Sometimes I think, I can’t do this, it’s too hard.”

He has given carvings to tourists, telling them to send a cheque when they get home, making them choose between right and wrong. He figures they have more to lose than he.

Their choice becomes part of his story and so far, not one disappointed him. “If they had stolen the carvings from me, they would still become part of the dialogue. It might have broken my heart, but I wouldn’t starve.”

He reads about the lives of Rembrandt, Thomas Aquinas, and Einstein. Fame is a funny thing, he says. Is it about your talent, or how many people know you, or what you leave behind?

Chuck figures he’s covered all the requirements for fame. “It’s historical, it’s documented, and it’s a collection. I have to become famous. Just for the simple fact that I’m productive and documenting. It has nothing to do with whether I’m good or not. Being good is just icing on the cake.

“George Washington Carver said, ‘When you can do the common things of life in an uncommon way you will command the attention of the world.’ He was the guy who came up with 300 things you can make with peanuts.

“Everything I do is done in an uncommon way. Some psychologist this summer told me it’s because I want to be liked.”

The Woodchuck shrugs. “A degree of truth – we all want to be liked – but I think I do it to make people laugh.”