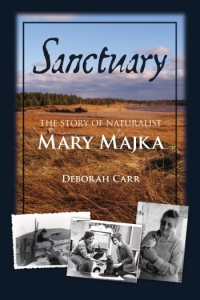 Mary Majka is one of Canada’s great pioneering environmentalists. She is best known as a television host, a conservationist, and a driving force behind the internationally acclaimed Mary’s Point Western Hemisphere Shorebird Reserve on the Bay of Fundy.

Sanctuary gives full expression to the intensely personal story of Mary’s life. A daughter of privilege, a survivor of World War II Poland, an architect of dreams, Mary Majka became passionately intent on protecting fragile spaces and species for generations to come.

In this amazing story of determination and foresight,  Deborah Carr reveals a complex, indomitable, thoroughly human being — flawed yet feisty, inspiring and inspired. 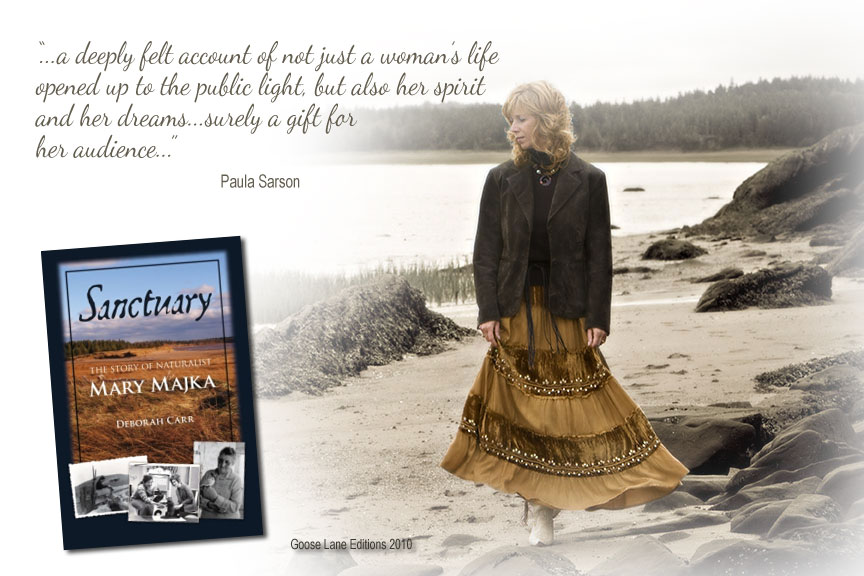 “Naturalist, educator, writer, and community activist, Mary Majka has done more to preserve the natural and cultural legacy of the Bay of Fundy than anyone in our time. Sanctuary is an engaging and clear-eyed portrait of her indomitable spirit — a celebration of a courageous life — and an important book.”

~Harry Thurston, author of Tidal Life, A Natural History of the Bay of Fundy

“Deborah interlaces the very facts of Mary’s life and accomplishments with imagery and prose to offer a deeply felt account of not just a woman’s life opened up to the public light but also her spirit and her dreams—surely a gift for her audience. Deborah captures Mary’s life story in a representative range of textures and hues that will allow readers to still draw their own conclusions. She has achieved an important balance between Mary’s own words and the words of others who have known her, to create a genuine yet complex portrait that readers will carry with them long after they have put the book down.“

“Deborah Carr’s fabulous biography of the courageous life of one of Canada’s great pioneering environmentalists goes a long way in demonstrating what a single individual can attain through the power of observation, understanding, and the application of findings to move decision-makers and governments on matters of environmental conservation and protection . . . The book is a must-read for everyone, a work that cannot fail to educate, inspire and ignite all of us!”

“Read this book for entertainment, for inspiration and for truth about what it means to be fully human.”

“It is no small feat to be able to compress a life as fully lived as Mary Majka’s has been into a readable, entertaining volume. Carr has done an admirable job in collecting up the myriad of threads of Majka’s life and weaving a living history and legacy that is honest without being sycophantic.”

“Mary Majka, long-time resident along the shores of Shepody Bay is a Fundy environmental icon. A fabulous biography of her written by local author Deborah Carr has just been released. If you enjoy a gripping biography, this is a must read. The book covers all of Mary’s life, starting in Poland, surviving WWII, immigrating to Canada, settling near Riverside-Albert in NB, and becoming interested in the mudflats and migratory birds that fly through the area every summer and fall. The chapters on Mary’s contributions to the conservation of the mudflats and the establishment of the Western hemispheric Shorebird Reserve at Mary’s Point are required reading for the avid conservationist. The book is well written, illustrated and researched, and is based in large part on many interviews with the subject herself. The book is highly recommended and will make for a great Xmas present for the birder in your life!”

“Spanning both decades and continents, Sanctuary: The Story of Naturalist Mary Majka is inspiring and heartwarming. Readers get to tag along with Carr as she visits Majka’s home. From the outset, it is easy to picture yourself sitting alongside the author and Majka on a log bridge in Mary’s Point, with a panoramic view of the Bay of Fundy to the south, as Majka lets flow the unedited version of her life story….Majka’s quoted words are woven through the story, complementing the refreshingly lyrical style of Carr.”

“From afternoon chats and much research comes the tenderly written and hugely inspiring Sanctuary: The Story of Naturalist Mary Majka, a biographical jaunt that takes readers on a journey spanning decades, continents, wars and resettlement.”

As a child, I watched Mary Majka’s television show, Have you Seen? and then twenty years later, my first home as a married woman was on Caledonia Mountain, where I encountered the well-known New Brunswick naturalist in person. In 2003, I began weekly interviews with her as a record for future generations.

The result is Sanctuary, the story of how a young Polish girl named Marysia faced sorrow, loss and war alone, and through this discovered a healing connection to nature. It is the story of how she evolved into the award-winning woman known as Mary Majka, who played a key role in preserving the natural and cultural heritage of New Brunswick and encouraged others to leave their own mark on the world.

But beneath all this, it is the story of finding sanctuary – of achieving that sacred place of acceptance and refuge, both in the world and within the soul.

New Brunswick lost a pioneer today….but many others lost a mentor and a friend. I sometimes referred to Mary Majka as our First Lady of the Environment. She nurtured in others an ethic built on caring for people and creatures, and also for culture and places.

Through her actions, she reminded us that no single living thing should be more valued than another. She once said, “My legacy is that I have been able to make people realize that some things are worth saving and protecting and treasuring.”

Farewell, my finest teacher…you slipped away from us, but I’ll always carry your lessons in my heart. May you be swimming the seas with joy and dancing lightly through the fields once more.

Accolades on a Life Well Lived

Mary Majka was a ‘force of nature’ as pioneering conservationist, Allison Lawlor Globe and Mail, Mar. 4, 2014