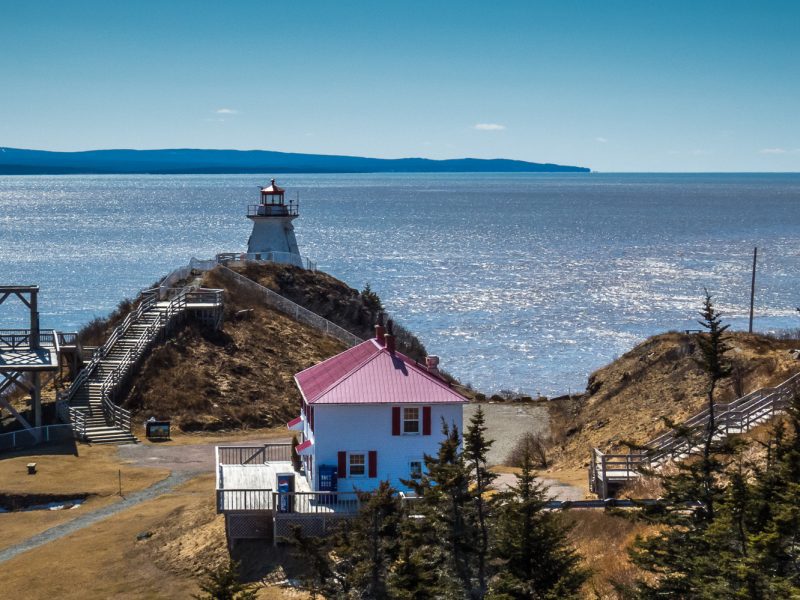 The Light with an Image to Keep

Dennison Tate faces into the wind as he gazes over the turbulent Bay of Fundy, one hand resting on the lighthouse that altered his life’s course.  An unexpected squall, already racing up the bay, mimics the frequent turmoil he weathered while preserving the Cape Enrage Lighthouse and turning it into a life skills training ground for kids and one of the province’s premiere tourist attractions.  But Dennison knows, as the tide shifts and the wind stills, peace will replace the gale, and smooth sailing may be possible once more.

He turns with a smile and a shrug, “Until the next time.”

New Brunswick’s oldest mainland lighthouse was destined for obscurity until Dennison and Ann Tate rescued the derelict property and built it into Cape Enrage Adventures, a non-profit ecoadventure company created specifically to finance the upgrade and maintenance of the lighthouse site.

Each spring, children, adults, and groups begin arriving for casual day visits or customized multi-day camps that provide unique adventures in rappelling, hiking, climbing, canoeing, kayaking, caving, outdoor survival, or nature explorations. And they are instructed, entertained, and served by an extraordinary group of young people led by an extraordinary teacher. 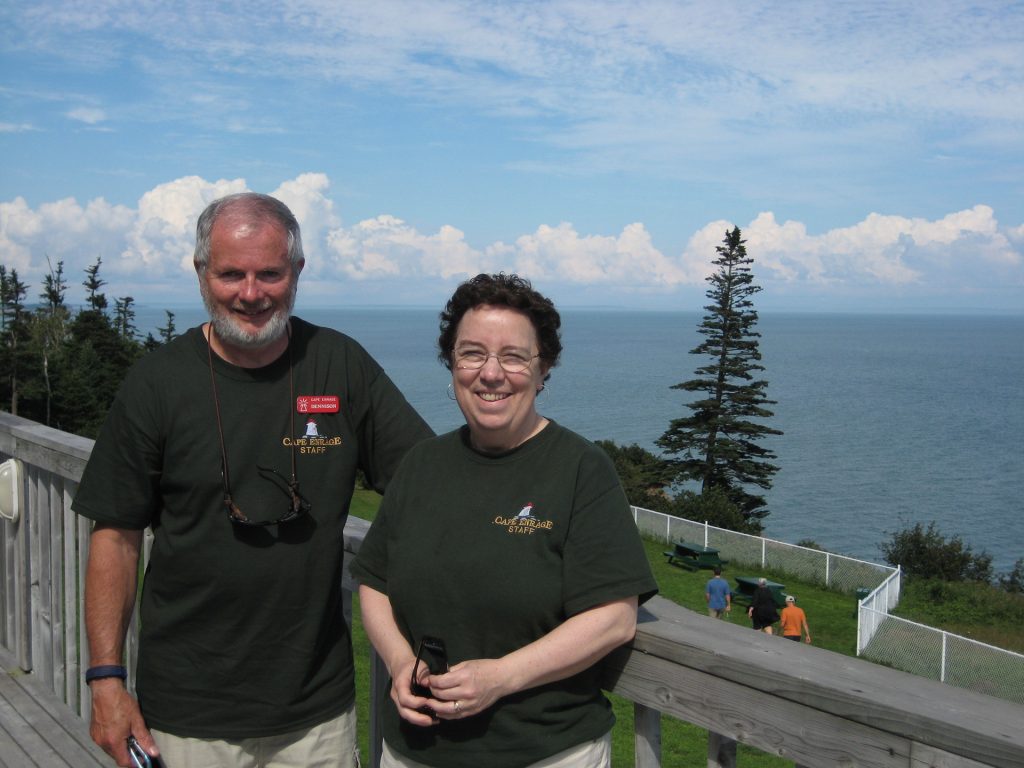 Dennison Tate grew up as the light keeper’s son on White Head Island, a small patch of rocky land, barely 4 km long, near Grand Manan at the mouth of the Bay of Fundy. His mom was a woman who sought excellence in everything she did. His hero was his dad, a gentle, deeply honourable, multi-talented man, and his mentor was a retired light keeper, who enthralled him with stories of his experiences. Between them and through them, Dennison acquired a profound appreciation for the beauty and purpose of these sentinels of the sea, uncompromising moral standards, and an aversion to mediocrity – all motivations that would set the course of his life.

In 1992, Dennison was teaching high school physics and discovering the thrill of challenging young minds to push their limits. His favourite activities were climbing, canoeing, and hiking and he frequently found himself pursuing these interests at Cape Enrage. Not only were the cliffs perfect for climbing, but the landscape and lighthouse reminded him of home. That spring, he discovered the Cape Enrage light keeper’s dwelling was to be demolished.

“During the summer, this weighed heavily on my mind. What could I do that would make this property viable, yet protect, preserve, and promote it? Finally, I sat down with a pad of paper and started writing ideas. I ended up with five or six pages and a plan for an environmental school project connected to the Cape.”

His vision was an outdoor adventure program, powered by students, that would teach them the skills of running a business, encourage appreciation of environment and heritage, and generate enough profits to maintain and preserve a cherished piece of the past.

Thus began a storm-tossed course through a tangle of government bureaucracy and regulations that tested the depth of his commitment and fortitude. But in the end, Cape Enrage Adventures emerged as a flagship model for promoting alternative uses for all light stations and an example of what can be accomplished with perseverance and commitment. 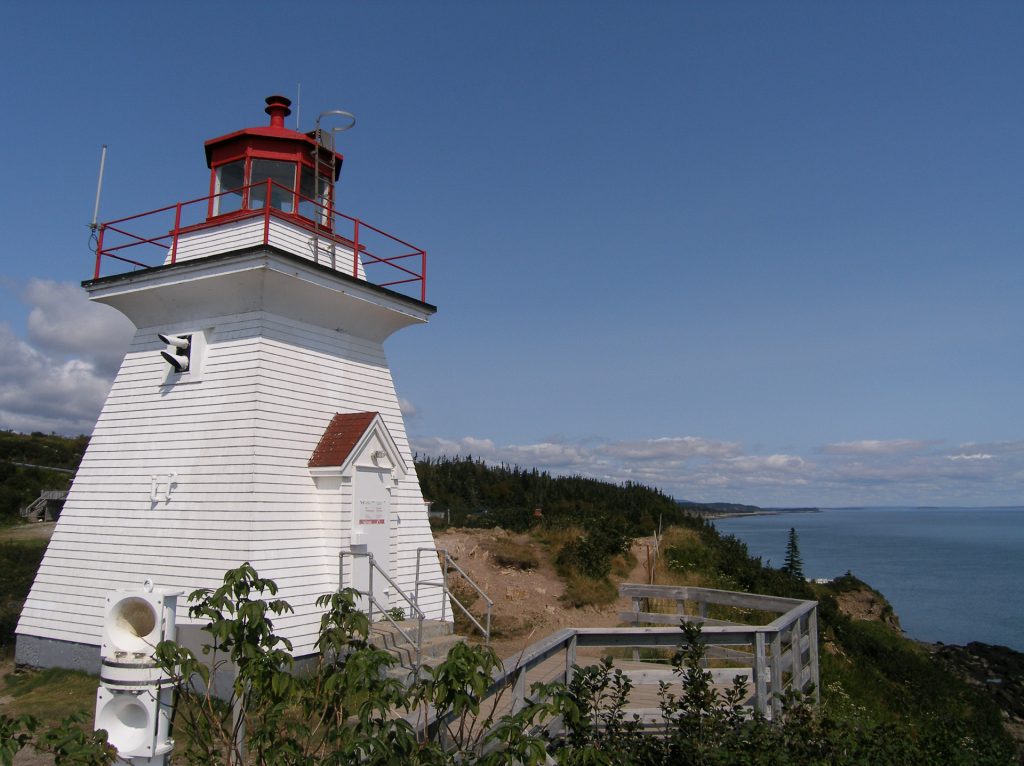 It has now been 13 years since the first high school students began restoration work. The lighthouse still sends out its signals of light and sound, while the once-derelict light keeper’s dwelling houses a kitchen, tearoom, bedrooms for staff, and offices. An additional residence and a gift shop were constructed, stairs descend to the beach, and white picket fences gleam with fresh paint. Approximately 40,000 people visit each summer.

But the truly unique part of this story is what lies beneath the surface. Due to the remoteness of the location, a revolving staff of 25 high school and university students live in co-ed dormitories on site during their six-day work rotation. Although the Tates set the initial strict rules of conduct, it is the students who enforce them, resulting in a unique community environment where peers govern peers.

Kate Macfarlane, of Sackville, has spent four summers at Cape Enrage. She says the Cape’s isolation serves to remove the pressures that teens normally face in society, leaving them free to be kids again. “We work hard all day, then in the evenings we decompress, eat supper, clean up together. It’s a nice feeling. A complete day. There’s no TV, Internet, or nightlife so we learn how to have fun with each other. You don’t feel you have to work at being part of the crowd because you already are.”

Out of this insular world grew a curious culture – the kids call it the ‘Cape Image’ – a rather elusive set of unwritten rules based on values of mutual respect, self-esteem, and personal pride. While difficult to delineate, the Cape Image is easy to observe in the exceptional effort made by these highly motivated young people.

Kate struggles to define it.

“It’s hard to describe, but within the first couple of months you come to understand. It means being considerate of people around you, offering to do the worst jobs first, going that extra mile. Out in the world, we go through our lives so fast and no one makes a point of connecting with others.”

There is also a ‘no romance’ rule so the kids learn to interact without social or sexual pressure, leaving them free to get to know each other in a deeper, more relaxed manner. Kate’s experiences taught her to seek the humanity in others, to respect the differences, and to discover the importance of, “making the extra effort, being aware of who needs help around you, or the difference a smile can make.” 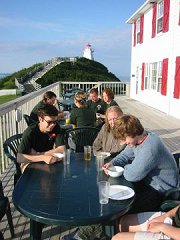 Patrick Mulhern, who graduated from camper to staff, spent six summers at Cape Enrage. “Everyone who works here develops a love for it in some way. Whether it’s the remoteness or the adventure or the sense of energy that pervades everything. And the sense of a shared love and a shared goal creates a strong connection between all members of the staff.” He says it’s the example set by Dennison and Ann that creates the cohesion.

“I didn’t realize anything would become more important than the teaching and more important than the outdoor challenges, but it has,” says Dennison. “If I could pick one thing I feel my life has had an impact on, it would be the staff and students at Cape Enrage. And it’s because of the philosophy Ann and I share about work ethic, moral standards, professionalism, and personal relationships.”

But the magic that happens here goes beyond simply sharing a philosophy. The students respond to the self-less commitment they see in action. Dennison and Ann, who both left their jobs in 2002 to pursue this dream full time, take no salary. And when the end of the year shows cost overruns, it comes from their pockets.

“We care about the Cape because so much of their generosity and hard work goes into it,” says Kate. “It is a constant struggle against red tape; so many battles without reward, no money, rarely recognized. That teaches me what a difference people can make when they put their mind to something and invest in it emotionally.”

“When we were both working, taking out a loan for $15,000 wasn’t so scary, but we’re living on a pension now, which requires a high degree of faith,” acknowledges Dennison. “But, it doesn’t seem to matter how much we have given away in our lifetime, there is still oil in the jar and flour in the barrel. I don’t think this has made us poorer. It has made us richer.”

Walking back from the lighthouse, the sun breaks through the clouds to shimmer on the surface of the water. Dennison knows there are more storms lurking on the horizon. But he also knows the value in stretching beyond limits and keeping the faith. “A lot of the things that worry us eventually just wash away. I always think of my father’s favourite scripture…’and it came to pass’.”