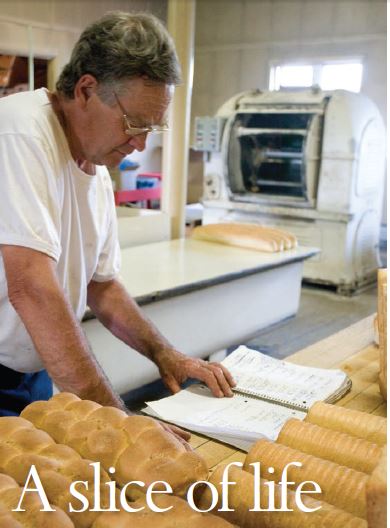 It’s hotly debated whether the best part is the smell or the taste. But for baker Lorenzo Richard, fresh-baked bread is about family, tradition and culture.

By noon, the loaves are lined in rows like kernels of Indian corn. The crisp brown crust varies in shades of golden brown to mahogany. To do the bread justice, it should be cut thick while still warm, then slathered with butter and molasses. It’s been hotly debated whether the best part is the aroma, the taste or the remembrance of kitchens past.

With a history as old as civilized culture, any bread in its purest, simplest form has the power to evoke vivid memories.

Every workday for the past 50 years, at precisely 4 a.m., Lorenzo Richard would quietly rise, donning a pair of white pants and a white shirt. After drinking a glass of water, he would slip from the house and cross the street to go to work.

By 4:10 a.m., he was pouring tepid water into pails, then rubbing a pound of yeast cake between his hands, crumbling it into each pail to soak. Flour, salt, sugar and shortening were added later, after the yeast began to bubble. Someone driving by for an early shift in Moncton, some 20 minutes away, might notice the light beaming from the windows of the bakery and smile at the familiar sight, knowing that continuity creates comfort.

By 5 a.m., with pliable mounds of warm dough rising in large tubs, Lorenzo’s habit was to crawl back in bed, remaining there until 6:15, when the dough would be ready to cut, shape and put into pans. An hour later, staves of spruce snapping and hissing in a brick-lined oven, Lorenzo was bent over a scarred and pitted table. Not just any table; its long birch boards and painted legs are as old and cherished as the bread recipe itself, and the three-baker, bread and table-are inextricably linked.

Only after rolling and cutting the dough, expertly shaping and slapping 200 to 300 loaves into charred pans for the second rise, would Lorenzo stop for a slice of day-old bread and a bowl of peaches or pears. At 10 a.m., wood coals glowing inside the oven, it was time for Lorenzo to heft his paddle and slide the pans into the oven-not just any oven, but one that Lorenzo designed himself. It holds 300 loaves at one time.