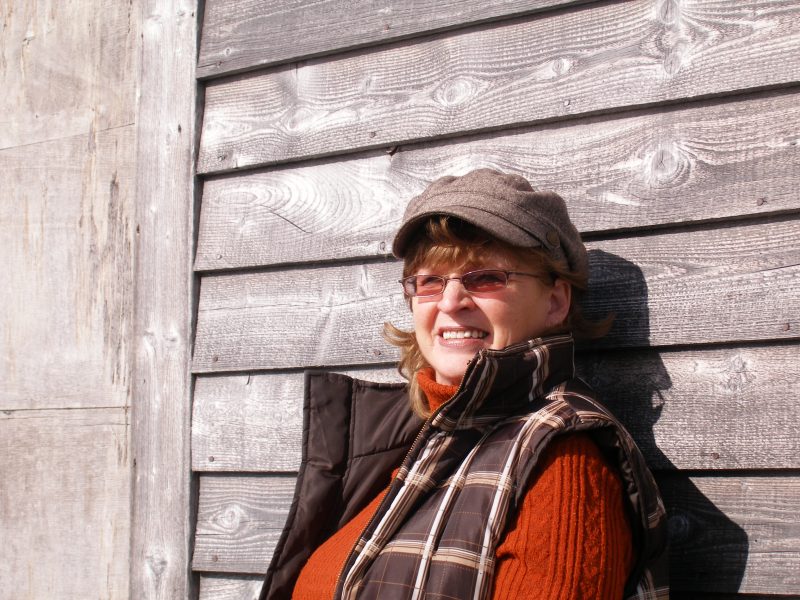 Each time I travel to Newfoundland’s Gros Morne National Park, I visit the Broom Point Fishing Exhibit, a family cabin and fish store restored to the way the buildings were in the 1960s when the Mudge family lived there each year, April to August. What was once a family’s home and business is now a historical site, designed to preserve the memory of Newfoundlanders who made their living from the sea.

Over the years, I’ve come to know some of the interpreters who, with the beauty of lilt and brogue and language, are the spirit of the place. They are the reason I return, time after time, to Broom Point.

On my last visit, I met Louise Decker. As the cool Gulf of St. Lawrence winds rattled the windows in the cozy fishing cabin, and softwood snapped in the stove, the tiny, 4’ 11” Louise related her story. 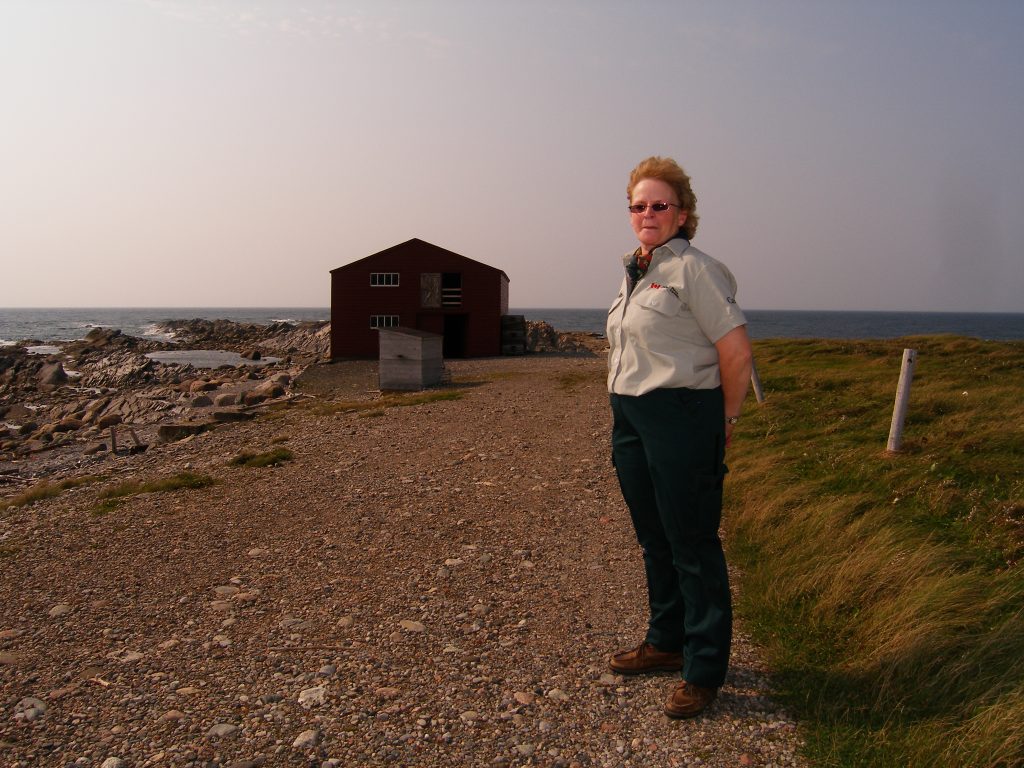 I was born in 1954, the year after they started the road up the Northern Peninsula. Mom had 12 babies; 10 survived. I’m number five. We did our homework by candle or lamp aside the wood stove where t’was warm. Some nights Mom would put rocks in the h’oven to warm, then wrap ’em in socks to heat the bed. There was lots of us in that bed, but even so, in the morning you’d jump right into your socks so’s your feet wouldn’t freeze to the floor.

My dad worked in the woods, and he fished. Oh, a hard worker was he, tough as nails. Dad loved to take me out in ’is boat. He had a putt-putt and when the motor got running good, he’d put the cover on and sit me right up top where it was warm. He always said, “If I doy on the water, throw me over; if I doy in the woods bury me where I drops.”

Dad just passed on Valentine’s Day. Eighty-two years old… passed away in the woods, girl, in my brother’s arms. God luv ‘im. The woods was the love of his life.

I was 16 when I quit school to marry Phil Decker from Lobster Cove. Phil cut logs that winter and we hauled ’em by horse to Lobster Cove. We sawed those logs to build our house and an open, 16-foot flat bottom boat. 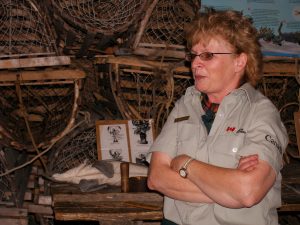 Louise explains what life was like growing up in a fishing family. (Photo copyright © Deborah Carr)

We built our own lobster traps, too… I knit the heads and Dad sawed the lath.

We worked hard that winter and then come spring, Phil tells me his friend’s gonna help him fish. I said, “What? You’ll pay him 30 per cent of our catch? Who helped you build the boat and traps?”

They didn’t want women fishin’ round there, you see. It was bad luck. I had to prove myself.

We stayed in a little shack at Lobster Cove, one room with a bed, table, stove. We’d fish all day, then come off the water in late evening and work on our house. Took us five years to finish it. We worked like dogs, but was happy. You didn’t have time to think about anything but trying to make it.

I was 78 pounds when I married Phil. My hands were so tiny that when the mitts got wet they’d fall off, so sometimes I hauled the rope with my bare hands, getting salt in the calluses.

Now I got fisherwoman hands, they are.

Louise pauses, holds out her hands, then glances through salt-splattered window panes to the pewter sea. It’s hard to imagine her tiny frame hauling traps, day after day.

You’re on the open water all day. The men can whittle off the boat, but a woman’s gotta wait to go ashore. I’d be walkin’ up the beach with my legs crossed. I’d be squattin’ there and the pains in my fingers from hauling all the twine would be so intense, my hands buckled.

You go out and get the lobsters from the traps, put ‘em in crates in the cold water, then back out to haul salmon nets, bring in the salmon, put ‘em on ice in your shed, then out again to tuck your cod traps and bring in all your cod….and of course, you got your splittin’ table on the beach—I was the hitter and gutter.

The men would fork the fish from the boat to the splittin’ table and I’d cut across the jugular, rip the belly and pull out the gut and cut on each side of the head, take the fish to the h’edge of the table, with one hand, push back on the fish and pull down on the head at the same time. 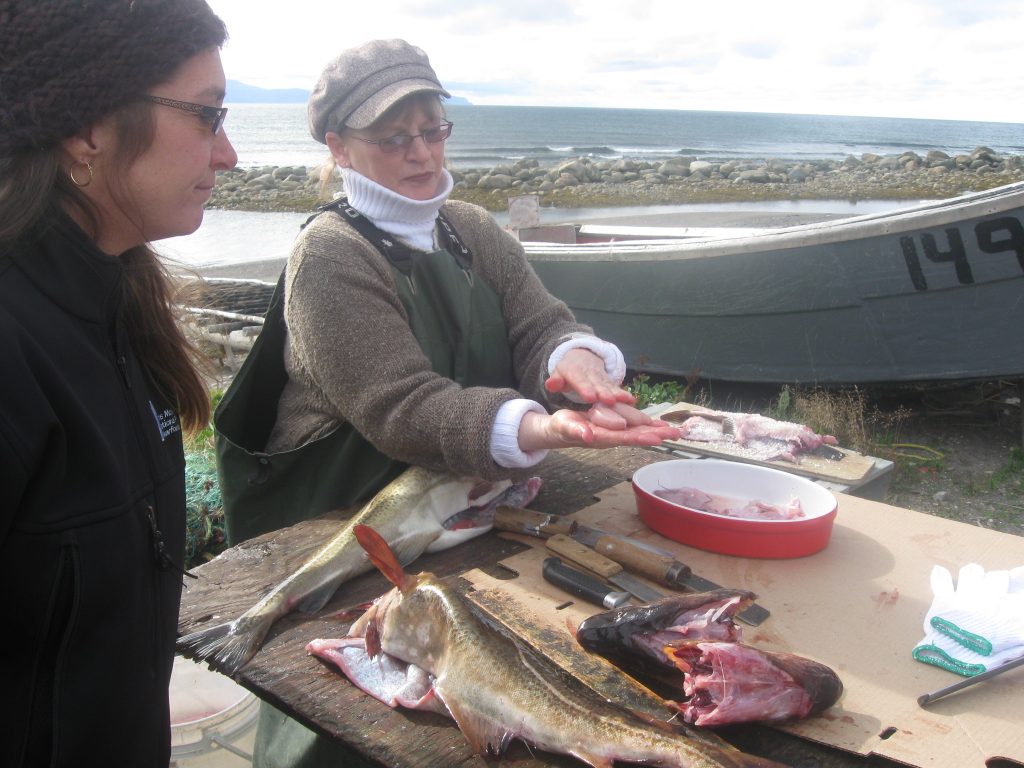 Louise shows the different parts of the codfish.

My husband would take the sound bone from the cod and then pack ‘em in a crate and we’d scout all that fish up to our fish store. We’d throw down a layer of salt, a layer of cod, head to tails, then another layer of salt and a layer of cod, all stacked into the store. It took eight to 10 days for the salt to preserve it.

After that, late some evening, we’d take the fish back down to the water’s edge, wash off the salt, back to the store again, and put it in a press horse overnight, which cuts down on the drying time, you see. The next morning, the fish would be spread on the flakes to dry.

There’d be times you’d be so tired, arms and shoulders achin’, but you didn’t want to give in and let anyone think you couldn’t do it. I’d go up behind the cabin, hide in the bushes and cry—made the world of difference—then back down on the beach making conversation like it didn’t happen. You didn’t want them to think you were a weakling.

Oh…that was important to me. I just wanted to prove a woman could fish as well as a man.

You’re up at four, down to the beach with your wool mitts, wiping the frost from the gunnels, taking the paddle and beating the ice from the boat, then out to tend the traps, adrenalin running, putting the new bait on, hearing the screeching of the gulls around the boat, whales sliding by beneath.

But still, a sense of peace. You were so proud of the job you were doing, not only that you were making a living, but getting closer to your man, knowing you brought fresh food to your table.

Then, you’d look to the horizon, daylight just breaking, and you had a sense that you were gonna make it work. We were building something together. We were going to finish our house and buy a vehicle, then have children.

Oh, we had such big dreams.

I was 21 when I started having babies. A woman from the community looked after the girls while we were on the water. I was hauling lobster gear when I was eight months pregnant with my third. At first, I thought a gush of water had washed over the gunnels, then I realized what it was.

I said, “Oops, I think my water just broke.” We finished that line of gear, then Phil got me to the hospital. The doctor said she came early cause of all the heavy lifting.

Oh yes, girl, I’d often think about my babies at home and us being out there, caught in the fog, not knowin’ if we’d make it ashore, but you just handle what comes your way. It’s like you have something guiding you. And you pray…not just for yourself, but for the other fishermen, too.

One day, it was blowin’ hard on the water and as I looked through the cabin window, I saw a couple boys in their boat coming in over the shoals pretty fast. I stirred up my husband and we ran to the beach and untied our boat. We were almost to them when the sea came in and dowsed our motor. Now, we had no power; all of us in the big sunkers, almost crushed amongst the rocks.

My husband started to panic and I said, “Keep a cool head. Try’er again.” After the third haul on the old Evinrude, it started. I tied the rope to myself and threw with all my might. Lo and behold, they caught it. We pulled them off the rocks and saved them.

That was a big turning point. The fishermen knew then I’d be there for them.

Another time, the wind came down pretty hard and the sea came in dowsing our motor. I got on my knees, right on the fish, and started to cry, “Please, dear God, I want to get home…I want to rock my babies one more time.”

Phil said, “Louise, give that up, we’re gonna get to shore. Find me somethin’ dry for the plugs.”  So, I yanked off my bra—the only dry thing onboard—and he dried the sparkplugs. We made it home.

But, it began to overwhelm me after that. By then, we’d had some bad years with storm after storm destroying our gear. Fish were disappearing. One year, we only earned $3,000. We made every penny count, tended our gardens, picked our berries, bottled jam, moose meat, rabbits.

Times like that, you think about your children and how you want to make life easier for them. Today, my girls are so proud of their mom and dad, the life we made for them with our fishing and how hard we worked. It’s a strength that you pass on to your children. Like my dad passed to me.

The dangers of the sea wore heavy on Louise. She also wanted security for her girls, so she obtained seasonal work as a labourer, the lone woman on a crew during the construction of Gros Morne. Several years later, she left the island for the first time, taking a three-year program on the mainland that would enable her to become a full-time groundskeeper. Eventually, she became an interpreter at Broom Point, saying that when she tells her story to others, it feels like her life has come full circle.

She reflects on her choices; how the park gave security, but also took it away.

Louise and Phil finished their home in the mid-‘70s, just as the government was beginning to move coastal households in the park inland to centralized communities.

At first, they refused to move, but eventually, all their neighbours were gone. During storms, when the power or telephone lines went down, repairs came slow and sometimes the snow ploughs didn’t come at all. Louise was pregnant so, reluctantly, they agreed to leave. Their home was relocated to Rocky Harbour for someone else, and they moved their young family to Neddies Harbour.

Sometimes on Sundays, Phil and Louise drive by to look at the house they built together. And remember.