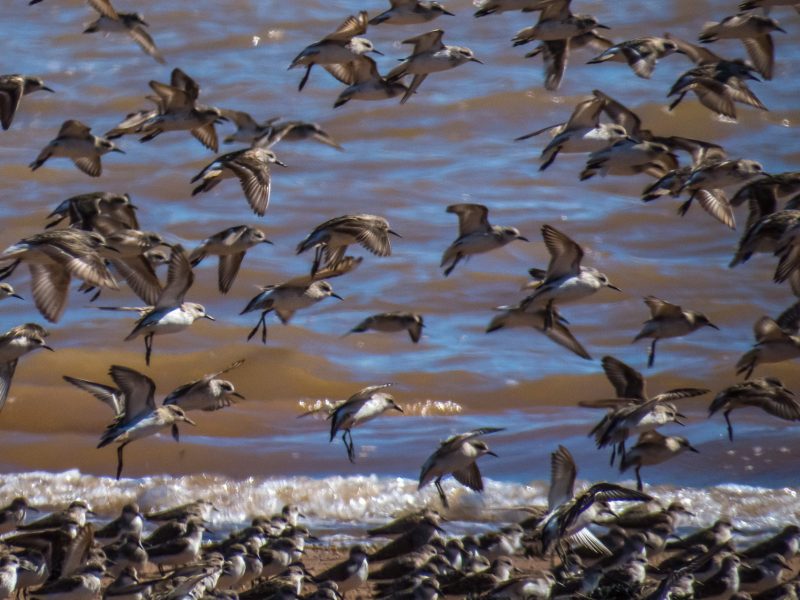 There are defining moments in life, when one is truly humbled and finally able to grasp their place in the world as a participant, an observer, a protector…this one was mine.

Moving as if to the sweep of a conductor’s baton, they flow off the beach like a tide of liquid mercury, then swoop into the air, a darkly ribboned smudge against the August sky.

As if on prearranged cue, they bank as one and the flock metamorphoses, revealing the flashing white of ten thousand underbellies caught in the glory of the setting sun. A dance of precision and grace.

Mesmerized, I float motionless in my kayak. Like a mirage, the flock turns toward me, skimming the glassy surface of the bay. As their numbers wash over me, I feel the brush of wings on my upturned cheek…but perhaps it’s only the breath of their passing.

Then, just as suddenly, they are gone…and I am adrift alone.

These, then, are the shorebirds of Fundy. 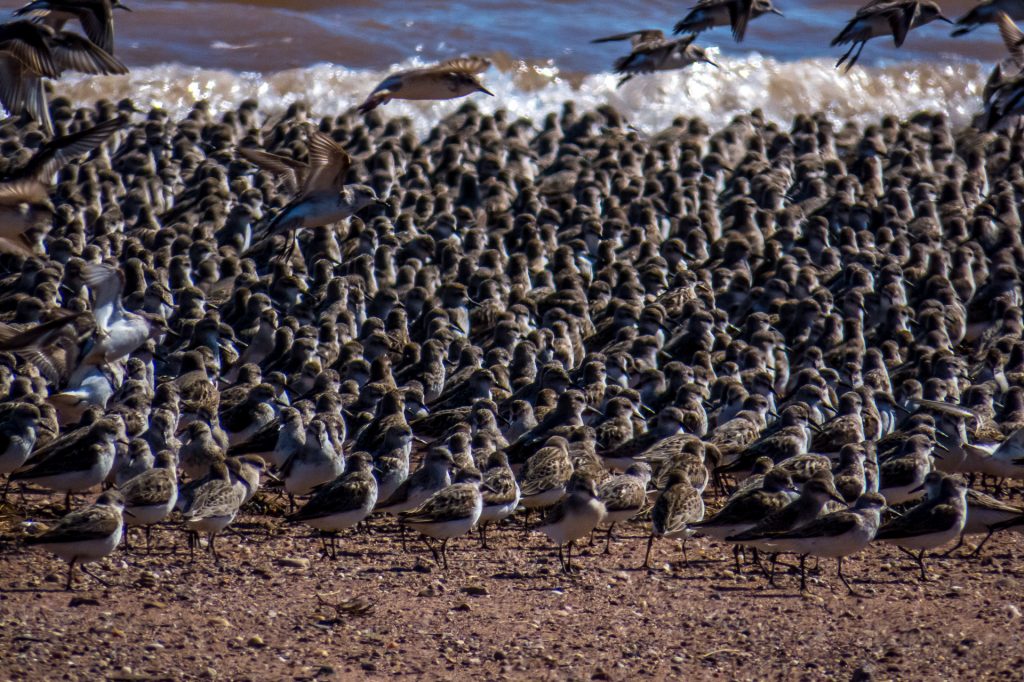 Each year, as the summer sun wanes, perhaps as many as three million of these aerobatic aviators stop at the Bay of Fundy while on migration from Arctic breeding grounds to the southern tip of South America. Their arrival begins in July; first the female flocks, then the males, followed by the juveniles in early August. Is their future path imprinted before their creation, or are they led by some unseen guide?

Here, in the upper reaches of a bay famous for the world’s highest tides, there is something less well known. A small, lipid-rich invertebrate found in enormous numbers on these tidal mudflats – the only location in North America – beckons the birds. Each flock spends a number of weeks gorging themselves until they have doubled their weight. At high tide, the birds rest on narrow strips of beach to conserve energy, then follow the ebb flow, heads bobbing as they gobble the mud’s bounty. This food will sustain them during the non-stop three to four day flight over open ocean to reach their winter destination.

As the flock pours past me again, I notice that individually, they are somewhat unruly, bodies hanging awkwardly below beating wings; but as a group with a purpose, they flow with lyrical beauty. My idle presence is afforded no more regard than a floating log as the birds return to the shore like metal shavings to a magnet. Perhaps ten thousand or more huddle together in a massive roost, their colouring a camouflage amongst the beach pebbles. A casual eye might not even detect their presence.

As reluctant as I am to disturb their rest, I long to see their dance once more.

The synchronicity of their flight has captivated birdwatchers and scientists for decades.  No single bird appears to lead, but they fly as a single, collective shape, billowing like a silk scarf caught by the wind.  Scientists claim the manoeuvres are evasive techniques intended to discourage predators, such as peregrine falcons and merlins, which can swoop into the flocks, knocking out a single prey. 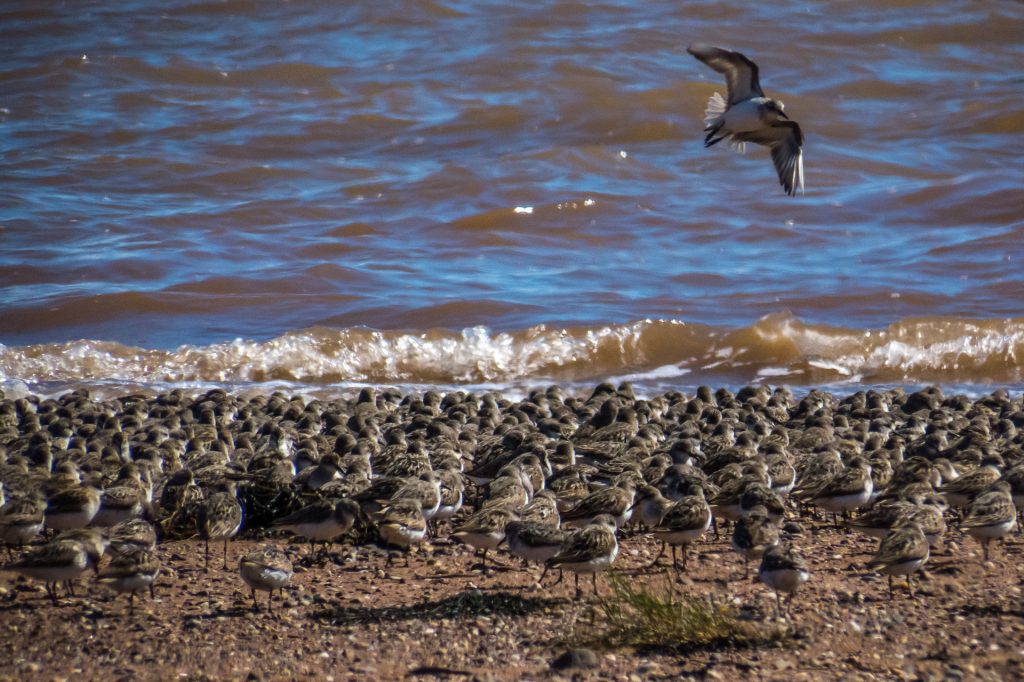 This, no doubt, is true; but beyond survival, I sense they take particular joy in the exhilaration of their symbiotic flight together.  Seemingly in tune with the surroundings, they harmonize with the wash of the waves on the shore.

Peter Hicklin, a biologist with the Canadian Wildlife Service, has studied these shorebirds since the mid 1970’s.  They are his life.  Through a banding program, he discovered the same birds together over consecutive years.  “They’re buddies.  They know each other,” he grins.

I like this sense of community – how they band together for security and strength.  I like that the females make this long journey together.  I’ve already discovered the hardest roads are often best travelled with my women friends.  Birds of a feather, and all that.

Their story demonstrates nature’s interconnectedness and this is what draws me back time and time again.  Watching them reminds me of my responsibility to the land and its creatures. 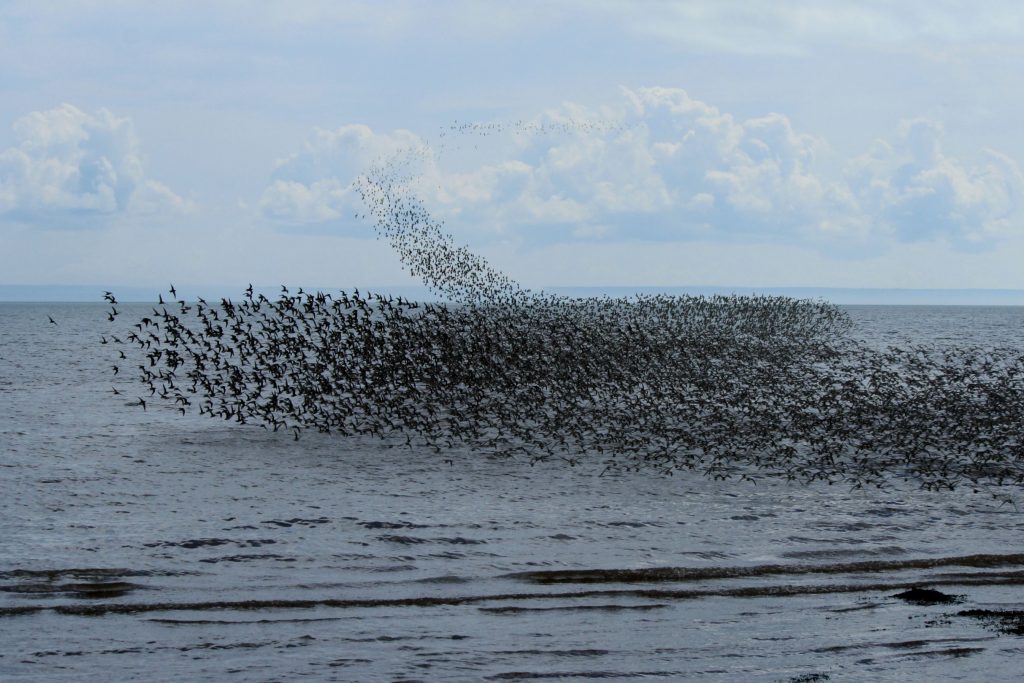 Suddenly, a tourist blunders on the beach with a camera, startling the roosting birds to flight.  Herein lies the dilemma.  We want to observe, and for a moment to feel their magic, but our intrusive presence can be a detriment to their existence.  Most of those who come here to see the birds don’t realize that each flight robs them of valuable energy reserves and compromises their ability to complete the journey south.

The disrupted flock surges towards me with a whirrrr of wings and in that moment, as they flow around me like water on a rock, I feel a certain kinship.

Then in a breath, they are gone and again, I drift alone.