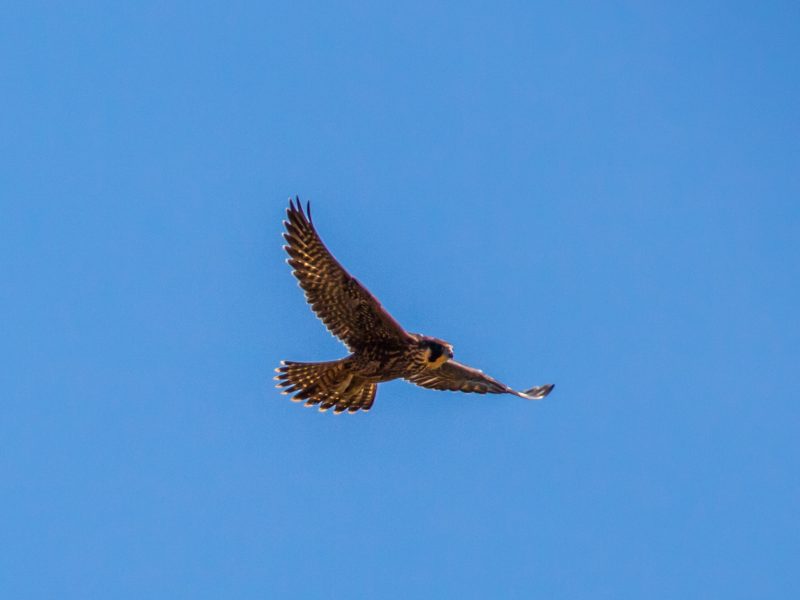 They’re called ‘the wanderers’, from the Latin peregrinus meaning ‘coming from foreign parts’.

So named for their lengthy migratory tendencies, the fascinating Falco peregrinus or peregrine falcon has once more resumed its wandering along the shores of the Bay of Fundy…thanks to a little help from some friends.

Making a slow, but remarkable comeback from the threat of extinction, the peregrine was upgraded by the Committee on the Status of Endangered Wildlife in Canada (COSEWIC) from an ‘endangered species’, so designated in 1978, to a ‘threatened species’ in 1999.  By the next review, the Canadian Wildlife Service is hopeful the status will once again upgraded, this time to ‘special concern’.

This optimistic outlook for the future of the peregrine is a result of a national reintroduction and recovery plan, coordinated jointly by the Canadian Wildlife Service, Parks Canada and the World Wildlife Fund, and in effect since 1982. 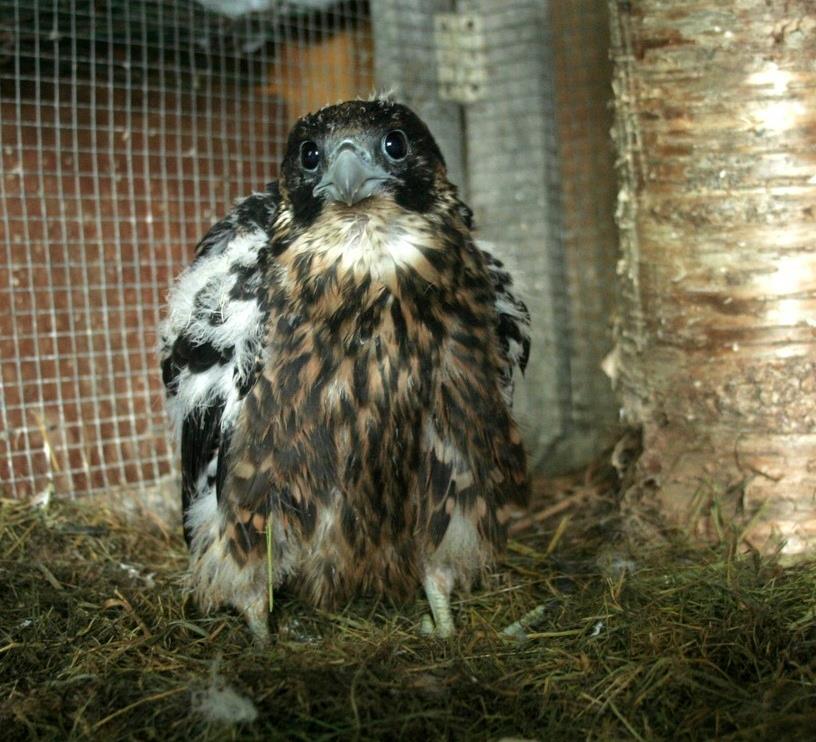 “Essentially it is really the flagship of good news stories for species at risk recovery,” says Diane Amirault, Species at Risk Coordinator at the Canadian Wildlife Service in Sackville.  “There are so many doom and gloom stories with species at risk and so it is nice to see one that proves recovery programs do work.  Environmental indicators are that the peregrines are now beginning to backfill the niche they once filled.”

The peregrine falcon once bred widely across North America, but extensive use of organochlorine pesticides (primarily DDT) in the post-war years seriously affected the reproduction cycle of the bird.  While the spraying program targeted insects, the effects of the DDT residues increased with each step of the food chain, through the small birds that ate the insects and grains, to the other species that relied on the small birds for food.  Those at the top of the food chain – example, the peregrine falcon – consumed the highest concentration.

Research in the late 1960’s indicated alarming levels of residue in young birds found dead in their nests – levels that were hundreds of times higher than that found in the birds eating the contaminated insects.

The end result of this toxic contamination for the peregrine was a deadly impact on the eggshell formation and hatching successes. Shells were softened and embryos malformed.

With this discovery came the realization that humans also were at the top of the food chain and pesticide controls were introduced in the 1970’s.  This was followed by the implementation of the reintegration and recovery plans in 1982 once the DDT levels were found to have reduced significantly.

The goals were simple, but daunting.  To establish a minimum of ten territorial pairs in each of six identified Canadian ecozones by 1992, and by 1997 to see these pairs naturally raising an average of 15 fledglings each over a five-year period.

The Maritime ecozone included New Brunswick, Nova Scotia, Newfoundland and Southern Quebec.  Diane says when the recovery program started, there were fewer than 100 pairs left in the Canadian wild, and they were totally extirpated from the Maritime region.

George Sinclair, Park Warden at Fundy National Park, has been involved in the plan since its inception.  “Between 1982 and 1988, we released 55 fledglings through a process called ‘hacking’.”

The process of hacking involved the analysis and selection of optimum nesting sites with special attention to appropriate protection from predators and access to adequate food sources.  The steep cliffs of the Bay of Fundy region and the abundance of waterfowl and shorebirds supplied an ideal for environment for establishing a peregrine population.

In Fundy National Park, the sites selected were on the cliffs of the Point Wolfe estuary and at Hunts Hole in Herring Cove.  Hack boxes, a little over one metre square, were constructed with 3 solid sides and a grilled front then affixed securely to the cliff.  Feeding tubes allowed for blind feeding so the young nestlings, or eyases, would not associate food with humans.

Banded peregrine eyases, approximately 32 days old, were received from a breeding facility in Wainwright, Alberta and placed in the boxes.  “We fed them quail and chicken for ten days, then did a gentle release by raising the door of the hack box to allow them access to the outside.  The young would sit on the edge and practice flapping their wings,” explains George.

Park staff watched the young carefully, keenly aware of any changes in health.  George says that sick or injured birds were quickly removed from the nests and treated by veterinarians.

During each of the first two years of the project, three fledglings were released, but in subsequent years, George noted they had better success with mass release.  In 1986, 14 young birds were released to fend for themselves in the wild and finally in 1989, a nesting pair returned to the Fundy National Park vicinity to set up housekeeping, producing the first three natural fledglings in decades.  This nest has continued to be productive every year but one, contributing a total of 37 young falcons.

Today the number of breeding pairs on both sides of the bay has increased to an estimated 11 in 2001.  During this time, a total of 119 young birds have been successfully fledged (meaning they have learned to fly).  Right now, it appears the 2002 numbers will show an increase to 14 nesting pairs.

“We now estimate that across Canada nesting birds range between 5,000 and 10,000 pairs.  Red color bands affixed to the young, indicate birds raised in captivity.  There are now fewer red bands around, which shows that they are populating on their own. This gives us direct evidence that through intervention, recovery was made possible,” says Diane.

Once the birds began to nest on their own, the park ceased the release program, allowing nature to resume its course unassisted, although monitoring continues through site visitation, observations and surveys.